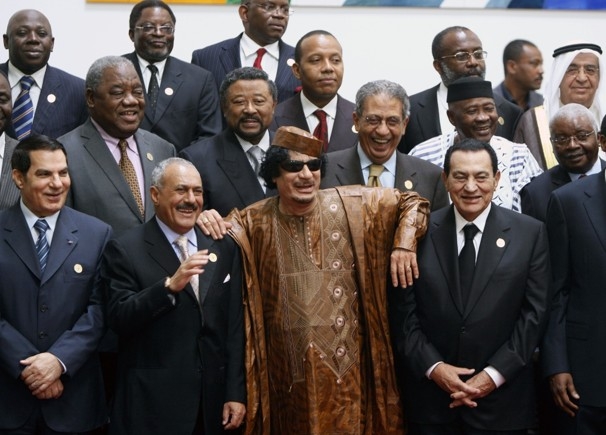 One wonders what was so funny at the time. Posing for a photo-op at the Afro-Arab summit in Sirte (2010), these men share a laugh, perhaps the clown in front, their host, said something funny. Oppressors often mistakenly believe they’re immune from the wrath of the oppressed. That’s because they surround themselves with buffoons, court jesters, men and women who can’t risk telling the truth. Those who tell the truth don’t usually live to speak another day. I was thinking about Syria this morning after Fajr and particularly how ugly the situation appears to be and yet the people’s struggle continues. Why has this era of darkness descended on Syria and when it ends, what would have become of the great luminaries from whose doors our Ummah took knowledge?

I recently came across this brilliant passage in “Mau’izah-i-Jahangiri” written by Muhammad Baqir Najm-i Sani, a high-ranking Mughal nobleman in the early 17th C. (trans. from Persian as “Advice on the Art of Governance” by Sajida Sultana Alvi). In it Najm-i-Sani wrote: If the judge (shahnah-i ‘adl) (ruler) does not regulate the affairs of the people, a clandestine rebel, abetted by tyranny, will destroy the lives of the nobility (khas) and plebeian (‘am) alike. If the light from the candle of justice does not illuminate the somber cell of the afflicted, the darkness of cruelty will blacken the entire country just as it does the hearts of the tyrants.” The Mughals knew a thing or two about power and authority.

In the process of looking for something I stumbled on a pile of old MD discs. One was labelled “Sh. Hamza – Calgary Khutbah.” It was recorded during the Dec. 2002 Deen Intensive in Calgary. I had something to do with DIs at the time and recorded it although it has never been released. I thought this particular excerpt was remarkably prescient given what we see unfolding in Syria. Shaykh Hamza on the Abuse of Power.