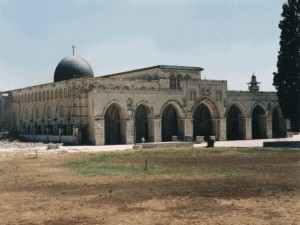 The author of the ill-tempered opinion is none other than the Muslim Brotherhood’s most senior religious scholar, Shaykh Yusuf Qaradawi. Qaradawi lives in Doha, Qatar where his weekly Al-Jazeera television show gets a fairly large reception in the region.

Not surprisingly, the newly elected members of Egypt’s parliament, particularly those belonging to the Freedom and Justice Party, dubbed the Mufti’s visit to Jerusalem “a crime” and “a catastrophe.” The architects behind the rise of the Muslim Brotherhood in Egypt were so outraged they accused the Mufti of committing treason.

Shaykh Ali Gomaa was reluctant at first to get into the fray. He tried to justify the visit as a private response to an invitation by the Jordanian royal family to inaugurate a research center named after Imam Al-Ghazali. While in Jerusalem, Shaykh Ali Gomaa said he availed himself the opportunity to visit and pray at Al-Aqsa. Realizing those were lame excuses he tried to pacify the near intifada his visit caused by delivering a wonderful Friday sermon extolling the many virtues of Al-Aqsa.

Still, the Ikhwan’s top brass pressed on, demanding he “apologize to the Arab and Islamic people” and resign as Mufti.

Mufti Ali Gomaa fired back. “Visiting Jerusalem is not a crime,” he wrote on his twitter account. “Jerusalem,” he said, “is in the heart of every Muslim and visiting it increases one’s feelings of rejection of occupation and injustices and helps strengthen the (Palestinian) cause.”

For senior scholars in the Middle East such as Shaykh Said Ramadan Al-Buti, at the heart of the dispute is the following question: Does the occupation of Al-Aqsa present sufficient reasons to cancel out an explicit order of the Prophet Muhammad, peace and blessings be upon him, that believers should visit the sanctuary?

The Mufti of Jerusalem and Palestine, and the Khatib of Al-Aqsa Mosque, Shaykh Muhammad Hussein, believes Muslims should continue to visit Al-Aqsa even though Jerusalem is under Israeli occupation. In a fatwa released by Dar al-Ifta (Al-Falesteniyya), Shaykh Hussein outlines the following four general conditions that Muslims should abide by when visiting:

Mahmoud Al-Habash, the Palestinian minister of Awqaf, welcomed Mufti Ali Gomaa’s visit as a gesture of solidarity with the Palestinian people and he called on Shaykh Qaradawi to retract his edict on grounds that it contradicted clear Qur’anic verses and reliable Prophetic traditions.

Habbash told the Palestinian daily Al-Quds that visiting Jerusalem was both a “religious commandment and a political necessity,” adding that Qaradawi’s ban “gave a free reign to the Israeli occupation which wants to isolate the holy city from its Arab and Islamic surroundings.”

Palestinian Authority President Mahmoud Abbas has called on Muslims to visit Jerusalem. Abbas’ was unambiguous at an international conference for the Defense of Jerusalem held in Doha in late February. “Visiting Jerusalem,” Abbas said, “is a show of support for its Arab residents and causes Israel’s policy of altering the face of the city to fail.”

Shaykh Qardawi spoke on the second day of that same conference and reiterated his fatwa banning Muslims from visiting Jerusalem. “Visits are banned in order to deprive the occupier of legitimacy,” Qaradawi declared. “Those who visit legitimize an entity which plunders Palestinian lands, and are forced to cooperate with the enemy’s embassy to receive a visa.” “We must feel as though we are banned from Jerusalem and fight for it until it is ours,” Qaradawi said.

Abbas shot back. “Visiting the holy city does not mean normalization. Visiting a prisoner is not normalization with the jailer. The Prophet Muhammad, peace and blessings be upon him, himself visited Jerusalem (the Night Journey) when it was under Byzantine rule,” the Palestinian leader said, “and never did a subsequent Muslim scholar ban visitation to the holy city due to foreign occupation.”

Strange as it might sound, Abbas’ arguments are more in tune with that of the vast majority of Muslims, thousands of whom visit Al-Aqsa every year. Every believer knows that the Messenger of God set out with hundreds of his followers to perform the pilgrimage to the Ka’ba in Mecca while it was under the occupation of Quraysh. Quraysh even refused the Noble Messenger entry into the city. Before returning to Madina, the Prophet got a concession from Quraysh to return the following year. In other words, the Prophet, peace and blessings be upon him, obtained what would be akin to a modern day visa from Quraysh to enter the holiest city in Islam while it was under occupation.

For all the years the Prophet, peace and blessings be upon him, prayed in Mecca and for fifteen months in Madina, he and his followers faced the direction of Al-Aqsa. At that time Jerusalem was under the control of the Roman Empire and yet no scholar has ever suggested anything was defective in their prayers. In other words, Jerusalem was holy long before Muslims arrived at its gates.

In performing their ziyaras to Al-Aqsa, Habib Ali and Mufti Ali Gomaa have demonstrated immense courage and vision by adamantly refusing to allow an act of religious significance to be subjected to the shenanigans of politicians.

And now a growing number of international scholars, Muftis from Bosnia, Kosovo and Croatia in the heart of Europe, along with thousands of ordinary Muslims all over the world, are voicing their support for Habib Ali and Shaykh Ali Gomaa.

(In a future post I plan to write about my experiences in Jerusalem and at Al-Aqsa during the week I spent there in 1999. I’ve also benefited greatly from Kanan Makiya’s “The Rock: A Tale of Seventh-Century Jerusalem.” I recommend it for anyone who enjoys reading.)